This will sound a bit weird, since we have been traveling for 3 weeks now.. Aside from the language barrier, we could have just been in a different city in the USA.  maybe not Reykjavik or Copenhagen – but we have visited these cities before – they felt familiar already.

Certainly the German cities of Hamburg and Berlin – they felt like modern cities. Cities with great public transport for sure, but they were big cities.  Famous places aside, they could have been a German New York or Philadelphia, since so much of the ancient has been destroyed by war.

Dresden was different. When we arrived in the old square – the churches and palaces made me feel like I was finally “in Europe.”  We took a walking tour, and gained a lot of insight about these “old buildings.”  The exteriors are built as if they are hundreds of years old, but sadly – they were all mostly destroyed at the end of WWII when the allied forces bombed Dresden. a fire wiped out the downtown area, and killed 25,000 Germans in one night.

Many of the buildings we are looking at sat as rubble decades until the 1980s when the people began reassembling them,  Sandstone that has been exposed to air for a long time takes on a black patina.  Fresh Sandstone is sand colored.  You can see that many of the old churches/palaces have had a lot of repair work. Many are completely modern under the facade.

But the Baroque.. Man – they killed the baroque look in Dresden. 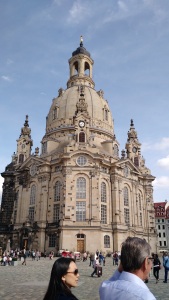 The Church of our Lady.  Its actually not catholic, but a protestant church.  It wasn’t hit by bombs, but in 1945, the insides burned out.  It was left as a ruin until the 1990s.  Then it was nearly totally rebuit (youcan see on the left that one side is still “black” sandstone – the rest is new. 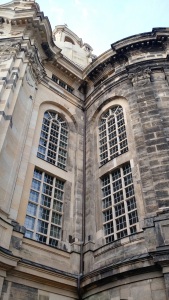 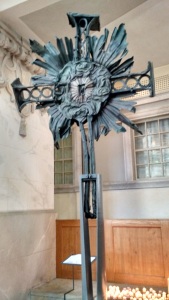 This was the cross on the old dome.  It was found in the rubble. 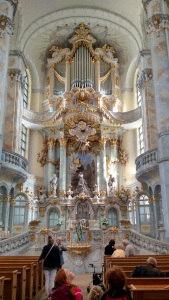 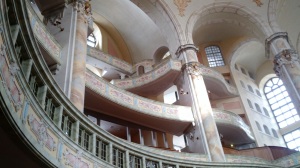 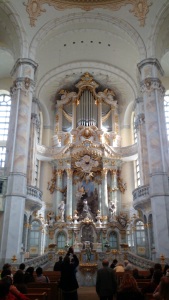 The inside is a riot of balconies and colors – all less than 30 years old!  You can see behind the altar -some carvings are original – black sandstone.

This next building is now a museum (3 museums actually).  It was a place of amusements – the king had parties here

Panorama from inside the courtyard, 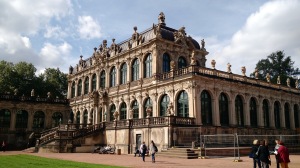 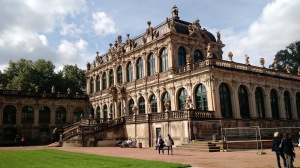 This was the Orangery. Where they had orange trees growing.

They also had a water nymphs grotto.  Fountains and statues of nymphs bathing. 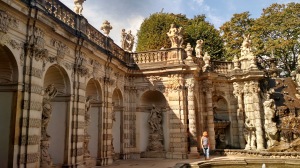 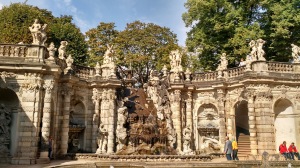 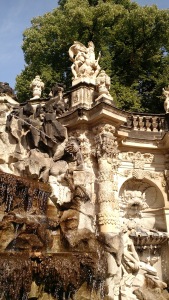 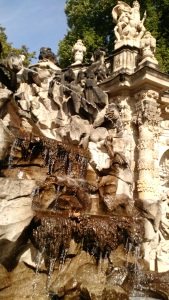 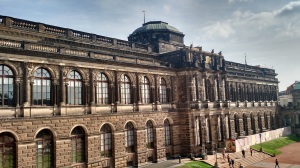 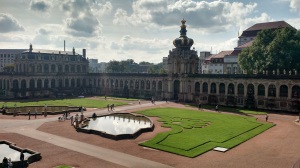 The Saxon Leader August II wanted to be king.  So, we became Catholic, and bough the kingship of Poland.  So, he had a catholic cathedral build (or perhaps it was his son). 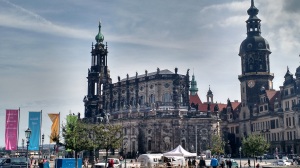 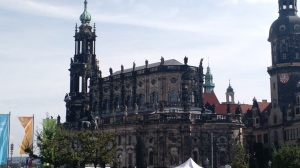 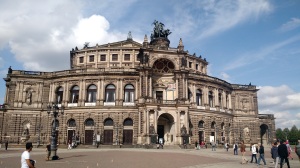 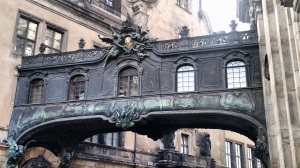 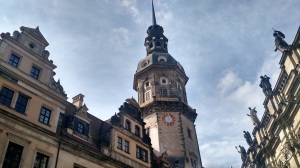 The ruler of Saxony’s castle.

This wall (Google curved a panorama – it is actual straight) shows every leader of Saxony from the 1200s through the 1800s.  They are all the same family.  It is long – made of 24000 porcelain tiles – only 600 were damaged in WWII.

Despite the fact that these buildings were ruins for the most of the last century – they look incredible now.

One thought on “Dresden (or- Holy Shit – we ARE in Europe!)”