On Monday, we took a cruise down the Danube river.  Despite the smokers surrounding us on the boat (really? while you eat?) it was a nice trip. 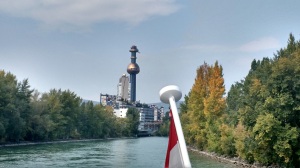 Unlike our journey down the Vltava in Prague, I did not have Strauss’ Blue Danube Waltz going through my head.  Highlights – the water is a really distinct green/blue color.  and the lock we went through – rather than 2 doors swinging shut – was a single door that guillotined the water (which sort of makes sense – it is less energy than swinging through water).

After our cruise, we went home. R and I went to the Austrian Army War Museum. This museum was unlike any other war museum. Typically these museums glorify war and show patriotic art about how awesome wars are In this museum, the art depicted the horrors and helplessness felt during war. for an extra 2 euros, I got to take photos in the museum.

and example of the art in the War museum. 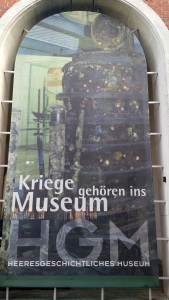 The slogan reads “War belongs only in Museums” How true.

the Museum is in an old barracks or army site. 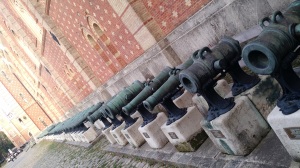 Many cannons on display out front.

The WWI section was incredible, and we spent most of our time here.  It begins with a history of Austria leading up to the war.  Many bits of information were new to me, as my understanding of WWI was very US focused. 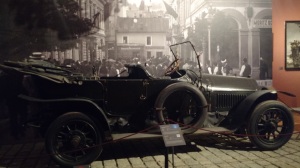 The car and uniform that Archduke Franz Ferdinand was wearing when he was assassinated in Sarajevo leading up the WWI.

We are all pretty familiar with the idea of trench warfare from WWI. The museum had us walking through a trench looking at artifacts form the time – art created from old shells, weapons used and the horrors faced. 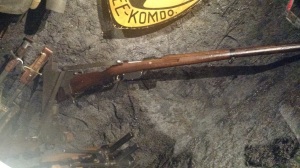 this is hard to see, but this gun is a periscope gun with mirrors and a wire to pull the trigger.  Keeping the shooter safe in the trench. 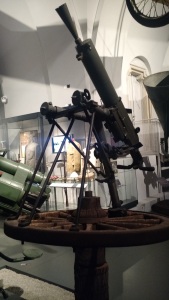 The Austrian army had no ant-aircraft guns at the start of the war. This led to innovations like machine guns strapped to a wagon wheel to create an anti-aircraft weapon. 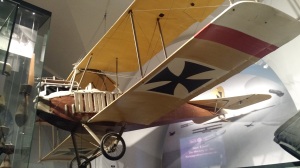 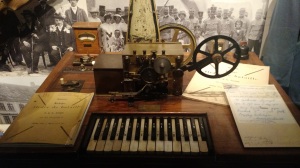 An early machine to send messages – based on a piano keyboard.

We also saw the naval histry section, the section on WWII (much briefer than WWI), and the naval exhibit – many model boats similar to the danish naval museum we visited in Copenhagen.

Upstairs was a BEAUTIFUL hall (shown below)with art on the walls and ceilings.

We had 2.5 hours, and saw much of the museum, but missed the 30 years war, and older war history. I came away with a better understanding of WWI (i knew the dates, but never connected that the Tsars of Russia were overthrown by Lenin during WWI.)

After getting home, and fixing a quick dinner, I went out and gave at talk to Android Heads Vienna and the Google Developer Group Vienna on mobile app performance.